Return of the King: King Bee and Gonzo Jones at The Stage – Review

By 11:30 p.m. there the parking on small side-street adjacent to The Stage was nearly full. The familiar sound of good old-fashioned rock n’ roll spilled out of the open warehouse doors.

Inside, Gonzo Jones was throwing down a tight set full of catchy licks and spot-on vocal harmonies. It was a party with their down home blues-rock, but the dance floor was empty. There were plenty of folks there, but they seemed afraid to move up to the stage and let loose.

It was disappointing to see so many wallflowers with a set like that. It must have been the unfamiliarity. Saturday night was many folks’ first exposure to the New York based band.

It was also their first show as “Gonzo Jones,” rather than “The Auctioneers.”

“We were going to get sued by a group of real auctioneers that wanted a lot of ad space on our website,” said Gonzo Jones frontman E.B. Sollis.

Sollis explained the simplest approach was to change the name. So they named the group after a vagrant they met in Crossville, Tennessee who claimed to be the heir to a large sum of money, but instead decided to walk the earth like Sam Jackson at the end of Pulp Fiction.

“He may have been full of beans, but when you meet a dude like that you don’t forget his name,” said Sollis.

Gonzo Jones’ set was well executed, featuring some wonderful slide guitar work and Eric Garcia of Juke on the harps for a couple of tunes. 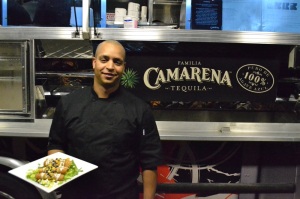 During the set break, some folks went to the back to sample some food from a truck. Food trucks in Miami are becoming commonplace, and you can always find one at The Stage on Sundays, but this truck was unique.

It was a tequila truck.

They didn’t sell anything, but they offered samples of their tequila-infused Mexican cuisine, from chicken and pork flautas to bite-sized cupcakes with tequila frosting.

The tequila truck is part of a promotional campaign for Camarena, a new brand of tequila so exceptionally smooth it’s a little scary. 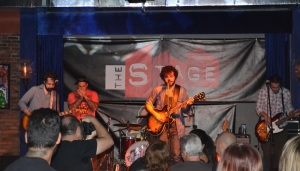 It wasn’t too long before King Bee was set up and ready to go. It was a big day for the band—their first show back on the Miami scene with new singer/guitarist, Vic Kingsley.

The sudden decision for former frontman and founder Angel Suarez to quit was a setback, but it didn’t put the band permanently out of commission. 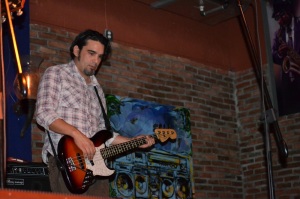 “We lost a good friend,” said King Bee bassist Jaime Abigantus. “But we gained a lot with [Kingsley]. He’s a great guitar player, singer and musician.”

When King Bee got rolling, it was a tough train to stop. The venue amassed a nice sized crowd to see the return of King Bee. Despite a small technical setback at the start, the set went smoothly into the early morning hours.

Kingsley showed us why he was chosen to front the band. His singing and rhythm playing crossed with his inexplicably captivating stage presence made for a strong linchpin on which the rest of the band could wheel around with great ease and style.

Fantastic guitar work by Pete Capo is a deal sealer—King Bee is bringing that old time blues-rock music into this decade.

A surprise cover of The Beatles’ “Dig A Pony” was something special to watch. Nobody every plays that song, but King Bee played it. And they did it great justice.

By about 2 a.m., when the show was winding to a close, it was certain they would be back. The new King Bee has something good going and I am glad I could say I was one of the first hear it.

I am a music writer. I graduated from FIU's School of Journalism and Mass Communications in April, 2011. I've always had a passion for music. Since high school, I've been involved in a few bands and written a good number of original songs. I loved going to shows and seeing live music. So when the notion struck me to combine the two, it seemed only logical that I write about live music when and wherever I find it. This blog is what came of that notion.
View all posts by clazaga5 →
This entry was posted in Concert/Show Reviews and tagged blues, camarena, e.b. sollis, food trucks, gonzo jones, jaime abigantus, king bee, rock, rock n' roll, tequila, the auctioneers, the stage, vic kingsley. Bookmark the permalink.

1 Response to Return of the King: King Bee and Gonzo Jones at The Stage – Review