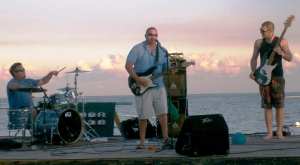 Bushwood is a name that’s been on South Florida’s tongue for quite some time. Now, it’s as loud as ever. After a seven-month hiatus, Bushwood is back in high gear with a brand new studio album. The self-titled work features ten wonderfully produced original tunes that draw from the undeniable beach-party vibe Miami is known for worldwide.

Bassist Adam Moskowitz thought it was high time for the Bushwood album.

“We decided it was time to give our fans something tangible. Something they could throw on and let it bump and sing and jam along with all summer,” said Moskowitz.

Objectively speaking, the album is of a similar vein to Sublime or Slightly Stoopid, though it sits on another end of the reggae/rock spectrum with it’s funkier feels on tunes like “Flomanja,” or more radio-friendly sound on tunes like “Drop The Anchor.”

Yet there’s still something else that sets it apart from other reggae/rock trios (of which there are many). Listening to the album a few times over, I’m still not sure what that thing is. The closest I can get is how it feels so much like… home, I guess. It brings me back to high school when all there was to life were friends and parties.

What I was reminded of listening to "Bushwood"

The album as a whole goes down like smooth rum served out of a hollowed out melon beneath the shade of a surf side tiki hut (see picture to the right).

Most importantly, “Bushwood” serves the group as a strong anchor point for the band to build upon. Perhaps it’s too early to think too far into the future, but I am already wondering what the trio has in store for us in times to come.

On a selfish note, it’s kind of nice that Bushwood isn’t taking off across the states to promote their new album, so we have plenty of opportunities to catch them live in the motherland of sun, surf and sultry women.

The album was released two days ago (5/20) when the band played a 3 set show at the Bierbrunnen Beer Garden in Ft. Lauderdale. You can get Bushwood’s self-titled debut album for $7 – $9 online, but you can pick up a CD from the band with artwork for $5 at any of their upcoming shows (see Bushwood’s official website for a schedule of dates).

As has always been my personal philosophy, music is best served live. And Bushwood is best known for being a live band. That said, get yourself over to a show and dig your toes into the sands of their sound.

I am a music writer. I graduated from FIU's School of Journalism and Mass Communications in April, 2011. I've always had a passion for music. Since high school, I've been involved in a few bands and written a good number of original songs. I loved going to shows and seeing live music. So when the notion struck me to combine the two, it seemed only logical that I write about live music when and wherever I find it. This blog is what came of that notion.
View all posts by clazaga5 →
This entry was posted in Uncategorized and tagged album release, beach, bushwood, debut album, miami, reggae, rock, slightly stoopid, sublime. Bookmark the permalink.

3 Responses to Right By The Beach: Bushwood’s Debut Album Drops